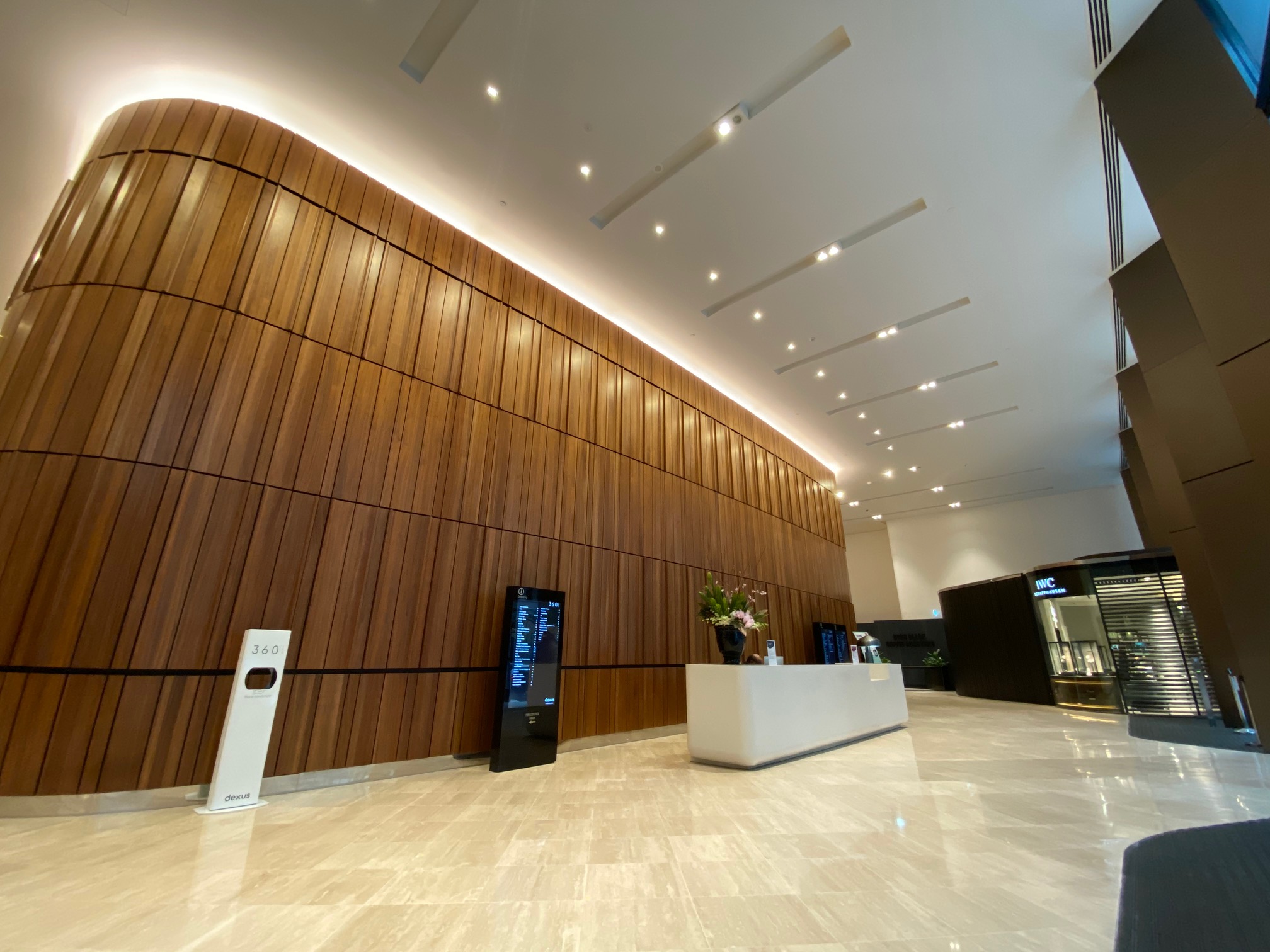 360 Collins Street is one of Melbourne’s most prestigious buildings, offering 35 levels of prime office space. Prolux are the electrical maintenance contractors for the A-grade building and have identified the opportunity to greatly improve the lighting control and efficiency within the complex.

Prolux identified the following issues within the building:

The project was to provide a centralised system for all common areas from Level 1 to Level 35 that could be controlled and programmed remotely to facilitate:

Areas falling under automatic control are areas whose main sources of control are only through PIR sensors (passive infrared – an electronic sensor that measures infrared (IR) light radiating from objects in its field of view) and time clock scheduling (turns lights on and off, sets lighting levels for different times of the day and changes the lighting profile for after-hours mode).

Groups that are automatically controlled are likely to be dependent on:

Areas falling under semi-automatic are areas whose main sources of control are through PIR sensors or a lighting control panel. Areas with this control type are usually within enclosed spaces and have two methods of altering the lighting: through detection of movement via sensor or through a manual user input via the lighting control panel (or combination of both). These areas are not affected by time clock.

Manual control, where the end user makes a deliberate action to control a group. Lighting control panels indicate the state of a group, either ‘on’ or ‘off’ with an illuminated LED. Manual control is also possible for direct control to all areas through the use of a Head End PC.

These areas operate under an automatic control. Detection of movement via PIR sensors is the main source of input that provides switching of lighting within the space. Behaviour of the sensors depends on the time of the day. During business hours, sensors will operate to turn lights ‘on,’ but will not switch lights ‘off’ until after hours is triggered. During after hours, sensors will operate with a timeout of 30 minutes and set lighting ‘on’ to 100% upon motion. After 30 minutes of no motion detection, lighting will switch to 0%. If at any time motion is detected, lighting will return to 100% and the 30 minute timeout will re-trigger.

The House Lighting Control System has been provided with a C-Bus Head End PC and software located within the Level 13 electrical riser. The C-Bus software will allow for control and monitoring of the house lighting from a central location, as well as the ability to adjust time schedules for the tenancy as needed. General buttons to control each floor is shown in the example template below.

Each floor contains three sections to control and monitor. These buttons will change the state of the whole floor as described:

This layout is presented when a level is chosen from the Head End PC on Level 13. From here they will be able to:

The significant benefits for Dexus have been greater energy efficiency, extra security and a reduction in energy costs.

The ability to fully control any space within the building, achieve the right look and feel as desired is the ultimate in convenience for any client.

Having such enhanced lighting control with C-Bus Automation eliminates any unnecessary running hours. The energy saving measures will also extend the life of light fittings, which will be a significant cost saving over the life of the building.

To find out how C-Bus Centralisation can improve the efficiency of your commercial building call Prolux Electrical Contractors today on 1800 800 880.

Home Automation is the integration of electrical devices working with each other. Things such as turning on lights anywhere throughout an entire building, opening blinds, pre-setting climate control or linking speakers to play music in office spaces can all be equated for, with a simple press of a button.

Devices can be connected through a computer or hand held device (smart phone or tablet) to allow for full control of lighting, heating, ventilation, air conditioning, appliances, security locks of gates and doors or other systems, to provide improved convenience, comfort, energy efficiency and security.

What is Biometrics?
Biometrics is the term used for measuring and analysing biological data; physical characteristics i.e. fingerprints, the eye’s iris, facial structure or voice.  It can be used for identification purposes and security to allow access to protected areas.

How does Biometrics work?
Firstly, it receives data through an appropriate scanner, encrypts the data and then analyses it.

How much does Home Automation Cost?

Prices start from as little as a few hundred dollars for something along the lines of a CBUS wireless light switch for your office. If you’re after something even more high tech, a Biometric Iris Scanner could cost you in excess of a few thousand dollars. If you’re looking to have your entire building fitted-out, then you’ll need to go through what a control system can do for you.

“Almost any appliance can be monitored and controlled automatically or remotely!”

The Ultimate in Convenience and Luxury…
Through the ingenious network that is ‘automation’, it’s easy to enjoy the ultimate in luxury. A tailored ‘smart office’ can fulfil your every request; putting you in charge of managing multiple devices simultaneously and effortlessly. From the moment you walk through your foyer, the pleasure of home automation will become evident.